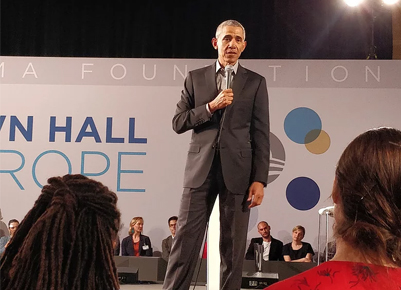 Last month, we received an email. First I got it, then Amna. It was from the Obama Foundation.

I, Kiran, told Amna about it then just ignored it because I thought it was spam because you know, when does the Obama Foundation email you?! A day later Amna got the email and the freak out began because we realised it wasn’t spam! We had two days left to RSVP to an a Town Hall event with President Obama in Berlin and in true brown people last minute.com fashion, we got there in the nick of time and confirmed our places!

Next, was figuring out what we would ask Obama as we were able to ask him one question. We each asked something different that reflected very real stages of where we are in our GirlDreamer journey. One was around what needs to be done to change the fact that at grassroots level, representation tends to be great. When real people work to directly address the needs of their community it’s all good, but as we go up the traditional forms of power ladder, we tend to see that representation lessen. More and more so until the powers that govern the way we live as society or our rights are decided by those that are a little (very) male, pale and stale. Obviously the question was more well formed and not as long but the point was about us on-the-ground people are doing our bit. What are those currently occupying more space than they need doing about making room?

The other question was around what kept Obama going during those times of sheer exhaustion of being on this jo urney. If anyone reading this is on any kind of social mission, you know the feeling. When everything gets too much but you know in your heart of hearts that you need to be here.

Of course, Obama gave insightful and diplomatic answers but what was great is that he is so very real. He isn’t afraid to add a little humour, to challenge back from a place of shared learning and to give young people the opportunity to lead the space. His enthusiasm for what Europe could and should be if young social leaders take charge was a beacon of hope for us all who are putting in the work and doing our bit to make our communities better. He spoke about everything from politics to haters, social media to meditation and even his parenting techniques. It was a chance to see the person behind the politics and presidency that we all see through the TV. It was a chance to be up close and personal with a man who has made history and who started his journey where many of us are now.

We met so many wonderful young leaders from 37 different European countries all with similar viewpoints and missions as us! Believe us when we tell you we are not alone in the fight we have here in the UK. White privilege, Black Lives Matter, women’s rights and equality, immigration, Brexit, representation for people of colour and everything in between was spoken about and even tagged on a big chalk board the event had that read “My Hope For Europe”. No one held back and it gives us hope that our generation will be the ones to leave the world in a better state than we found it.

We’re so grateful for the opportunity to have been included in such a special day! To make things better, there was a mini heat-wave taking place in Berlin at the time whilst it was raining in the UK so meeting President Obama and getting vitamin D all in one weekend definitely goes down as the best weekend we’ve had this year! Or ever.