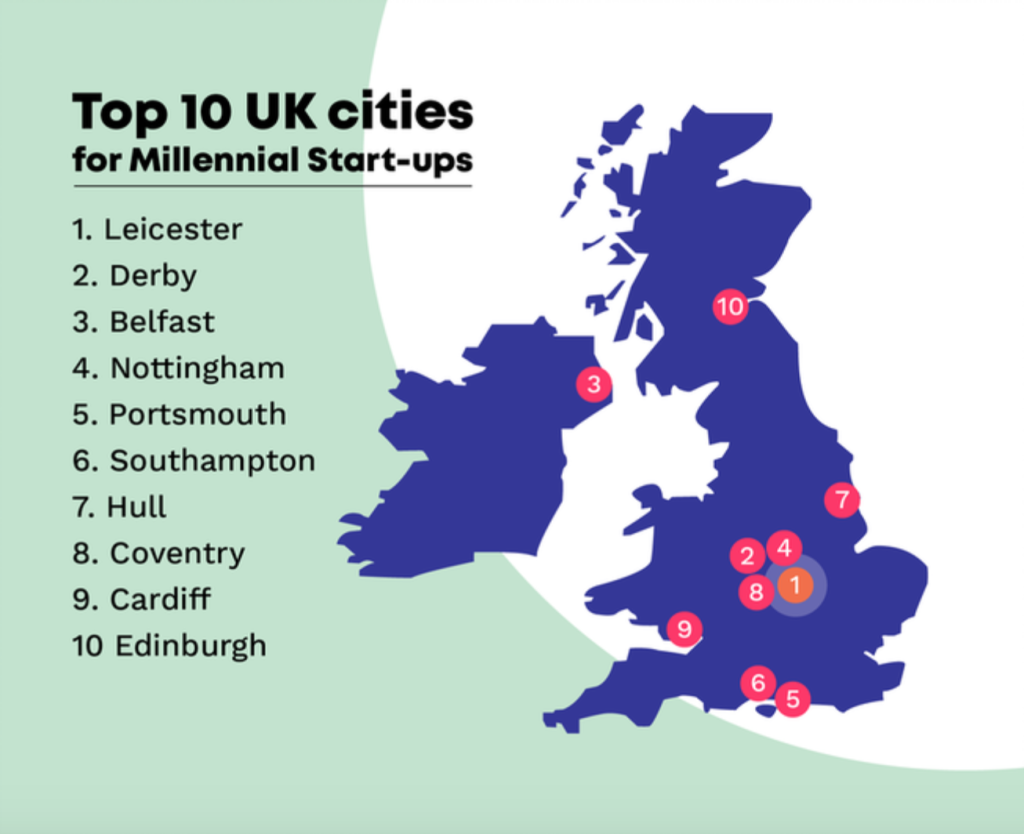 Starting up your own business can be a scary and stressful time. Choosing a location for your new venture is likely to be one of the most daunting decisions you’ll face. From overheads to audience, where you choose to establish your start-up can have a huge impact.

If you’re an entrepreneur from the millennial generation there’s a good chance you won’t have had the experience in the workplace required to establish high capital investment, or an extensive business network. This will make considerations about cost and location more important to you. We, as a generation, also have different values to other generations when it comes to things like the environment. For these reasons, the cities where millennials might find the best opportunities for their start-ups are likely to differ from what might be considered ‘the norm’.

Online business print providers Instantprint have recently analysed these and other points to formulate a list of the Top Ten Best UK Cities for Millennial Start-ups.

The factors analysed were:

Edinburgh is a great city for young entrepreneurs, offering a capital city environment without the price tags and competition of London. The Scottish capital already has a thriving start-up hub. Edinburgh ranks higher than any other city in the top 10 for start-up businesses, with 13.3 per 1,000 residents.

Although it’s less pricey in London, Edinburgh isn’t the cheapest on this list with cost of living sitting at the highest in the top ten.

The Welsh capital just pushes past Edinburgh. Across the board, Cardiff has low-to-middling scores which prevents it rising higher on this list. The city’s real strong point is recycling. 58% of Cardiff’s waste is recycled, the most of any city on this list, and the only one to break past the halfway point.

Coventry’s central location offers an immediate advantage to many young entrepreneurs. As the most central city in the UK, Coventry is a great base if you plan on travelling round the UK for business. Teamed with the fact that less than 25% of trains to and from the city are late, Coventry is a great travel base.

Office rents in the city are also a strong pull, with average prices per square metre per month, coming in a just £16.50.

2017’s UK City of Culture offers great value for money for young entrepreneurs. Office prices in the city are joint cheapest in the top ten, at just £16 per square metre per month. Hull also offers the lowest cost of living in the ranking.

The number of properties that have superfast broadband available is stopping Hull from claiming a higher position on the list. This is the lowest in the top ten, at just 88.8%.

One of just two southern cities that make the list, Southampton’s low cost of living, average age and office rental prices confirmed its respectable place in the ranking. Southampton’s relatively close proximity to London may also be a boost for you, if you’ll be travelling to the capital a lot.

The second, and final southern city in the top ten, Portsmouth, beat out Southampton due to its low office prices. Portsmouth has the joint lowest average office prices on this list, alongside Hull, at just £16 per square metre per month.

Like Southampton, the city is great if you need to be in the capital or on the continent for your business.

This midlands city has broken through to the top half of the ranking based on strong scores for superfast broadband availability, low price of coffee and reliable travel.

The only major shortcoming of Nottingham is the number of start-ups per 1,000 people, which at 7.62 is lower than most others on this list.

The Irish capital could be a great alternative to the more expensive likes of London and Edinburgh for millennials start-ups. Belfast has a low cost of living which gives young people more buying power in the city. Although number of start-ups are currently low, there is considerable investment in the area at the moment.

Start-up funding in the city has recently been made available from key investors including Crescent Capital, Kernel Capital and Co-Fund, so it’s worth exploring opportunities in the area.

Derby performs well on most points analysed in this ranking. With a relatively low cost of living and office prices at an average of £18 per square metre per month, Derby can offer young entrepreneurs a lot for their hard-earnt cash. You’ll find it easy to stay connected in the city too, as broadband connectivity and infrastructure are also reliable.

Leicester performs incredibly well across the board in this ranking. Office prices are low at just £17 per square metre per month, the third lowest in our top ten.The city already has a thriving start-up hub, with 11 start-ups per 1,000 residents. Furthermore, the city itself is supportive of these businesses. Every year, Leicester is host to a business festival, attracting 10,000 visitors to the city. This gives you the opportunity to generate new leads and establish your network right on your doorstep.

This information should hopefully give you a bit more insight into where you’ll find the best opportunities for your start-up. Remember to consider locations that are a bit off the beaten track. This can often work wonders when it comes to cutting costs and getting set up.